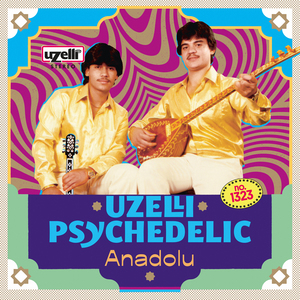 Uzelli is a music company that stretches between two geographical spots: Istanbul, Turkey’s polyphonic metropolis and Frankfurt, Germany a European trade centre. Established in Frankfurt in 1971 by Muammer and Yavuz Uzelli, Uzelli soon became a centre of Turkish life in that part of Germany. They started ...

their business by selling and distributing electronic equipment, carpets and other merchandise necessary for Turkish immigrants. After 1974 Uzelli became a record label that rapidly expanded into distributing, manufacturing, and producing cassettes. The company also participated in the dynamic creation of the Turkish music market.

Uzelli began by bringing music to Turkish people back in their homeland and Turkish immigrants living abroad. The label’s productions were soundtracks of the everyday lives of gastarbeiter (guestworker). Social and family celebrations such as weddings and circumcision parties couldn’t happen without Turkish music on cassettes, from folk to çiftetelli (dance music), to the stars of aranjman (Turkish covers of western music). At the end of 1970s Uzelli opened its office in Istanbul, linking music business in two continents. Till the late 1990s, Uzelli recorded and produced the biggest stars, as well as unknown and undiscovered talented performers of Turkish music. Uzelli not only produced its own music but also licensed recordings from other labels and purchased the rights to entire catalogues. The label’s musical choices were driven by the increasing demand for folk, Arabesk, Taverna and Turkish Art music. By meeting expectations of their customers, Uzelli created an unusually diverse and spectacular archive of Turkish music from 1970s and 1980s. Uzelli’s extensive catalogue consists of more than 1000 albums and almost 500 artists, spanning respected stars to unrecognized talents.

In the early 70s, a little shop opened in Frankfurt. It sold the small comforts many Turkish guest workers missed in Germany: tea glasses, carpets, art for their walls. It also sold music. The shop became a hub for Turkish migrants, and the cassettes it sold morphed into a label, named for the its founders, the Uzelli brothers.

Now the label is starting a new chapter, uncovering forgotten gems and funky classics in its vaults on Uzelli Psychedelic Anadolu (release: March 17, 2017 / digital and vinyl). This compilation spans the label’s heyday: the period between 1975, the high point of vinyl culture, and 1984, the culmination of the cassette industry.

The time is ripe to reconsider this music, as new migrants are seeking homes across Europe and as Turkey experiences its own complicated times. Uzelli’s artists feel charmingly retro, yet undeniably timely.

The ten years of Turkish history covered on Psychedelic Anadolu were times of political chaos, divided into two periods by the military coup in 1980. After the coup d'etat, those citizens who felt ignored and underappreciated, for whom politics had never been the most important part of their daily lives, became more and more visible. They demanded their music be heard in their new urban environment.

The political circumstances transformed everyday routines, culture and music. Rock was expanded to make a place for new musical genres that more accurately reflected people's social and economic positions, their innermost feelings and moods. Psychedelic music of the 1970s combined hip instruments such as electrified bağlama, moog and synthesizers with sweet melodies and heart-braking lyrics, and these sounds became even more radical and edgy in the 1980s.

The tracks on Psychedelic Anadolu are selected from the best psychedelic arrangements of rock, pop, and folk songs. They also represent a unique combination of personalities and characters, from giants of the Turkish Psychedelic scene like Erkin Koray and Ünol Büyükgönenç of Kardaşlar, to unknown and undiscovered Kerem Güney; the ephemeral band Zor Beyler with Ayzer Danga from Mavi Işıklar and Moğollar on drums; Ali Ayhan from Urfa with his unquestionably unique voice from the folk scene; and Akbaba, the extreme wedding duo. This compilation would not hit so hard without two ladies: the mysterious Elvan Sevil and Neşe Alkan, accompanied by Zafer Dilek Orchestra, whose amazing voices bring down the tempo and melt your heart.

“This music shows us how music can build a bridge to the other half of your life; how these songs and poems can constitute collective knowledge and a soul transmitter across various political landscapes and across generations. As much as this album represents a piece of Turkish music history,” says Booty Carrell (DJ, Turkoholic).

“Uzelli, with its 40+ years of legacy and experience in music industry, contiune to pays a tribute to its artists and Turkish music culture of late 70s, 80s and 90s, uncover forgotten sounds with Turkish roots through new stories and refresh compilations in different formats as vinyl, cassette, digital,” says Metin Uzelli Executive Director of Uzelli.